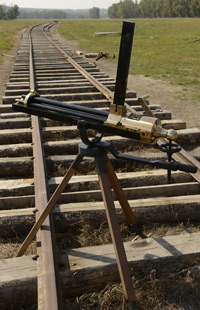 The legendary Gatling Battery gun, invented by Richard J. Gatling, was an early hand-cranked machine gun that played a significant role in the conquest of the American West. The original design, patented in 1862, was fairly simple: as the crank was turned, six rifle barrels rotated around a central axis. Bullets were loaded, and strikers behind each barrel fired shots. The earliest models released 200 shots per minute, far more than even the most experienced marksman could achieve.

Despite the weapon’s destructive capabilities, Gatling promoted the gun as a humanitarian device. He reasoned that a regiment armed with it would fire more rounds per soldier than one without the weapon, reducing the number of men needed and therefore the number of casualties.

Gatling spent the entire Civil War trying to convince the Union Army to adopt his gun. While the weapon was deployed in a few battles, the U.S. Army didn’t officially approve it until 1866. By then, Gatling had refined his design substantially, and the Army was frequently equipped with Gatling guns to defend railroad workers, settlements, tracks and materials against Indian attacks.

An advertisement for it boasted that the Gatling gun would do for firearms what McCormick’s reaper did for the sickle and the sewing machine for the common needle. By the end of the 19th century, the Gatling gun had fulfilled that promise, becoming “a brand name that meant blood and thunder” and carving out a niche as the West’s great weapon of terror.