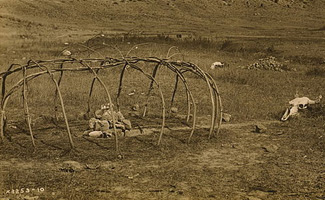 This Hell on Wheels Handbook takes a look at Native American sweat lodges like the one featured in Season 2, Episode 7.

The spiritual and therapeutic benefits of steam were well known to 19th-century Native Americans, who constructed domed sweat lodges within which medicine men would heal the sick and conduct religious ceremonies. Water poured over hot stones created intense vapors whose purpose varied from purification to preparation for larger rituals.

Lakota holy man Black Elk describes the sweat lodge ritual as drawing on all the elements of earth, water, fire, and air. “The water represents the Thunder-beings who come fearfully but bring goodness,” he said. “The steam which comes from the rocks, within which is the fire, is frightening, but it purifies us so that we may live as Wakan Tanka [the Great Mystery] wills.” If the participants became truly pure, Black Elk believed, Wakan Tanka would sometimes grant a vision.

Sweat lodges were constructed of simple materials — branches, stones, and animal hides — but these materials were rich with significance. For instance, willow branches were chosen because of the tree’s proximity to the water used in the ritual, and because the deciduous nature of the willow meant it underwent a rebirth each spring akin to the sweat lodge participant’s experience.