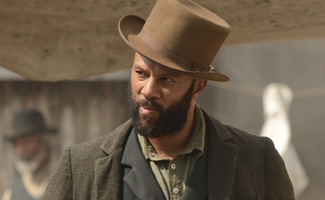 This week, The Huffington Post features a preview photo of Virginia Madsen’s guest-star turn on Hell on Wheels, while MTV catches up on Common’s extensive career. Plus, AOL reports on Anson Mount’s festival stop in Tennessee. Read on for more Hell on Wheels news:

• The Huffington Post debuts an exclusive photo of Virginia Madsen’s first Hell on Wheels appearance, observing that “chaos is on its way to AMC this week.”

• MTV speaks with Common about his new album and his movie projects.

• The Tennessean conducts a long interview with Anson Mount — which covers everything from his career to his favorite books — while fishing in Mount’s native Tennessee.

• Christopher Heyerdahl tells Assignment X that The Swede is “like a great chess player and he is plotting the long game.”

• According to Variety, France’s Canal Plus will air Hell on Wheels on one of its new free-to-air channels.

• MediaPost thinks media will drive mobile advertising growth and cites AMC’s use of the “Watch with eBay” app to promote Hell on Wheels.

• For recaps and reviews of Season 2, Episode 7, “The White Spirit,” check out The A.V. Club, Cowboys & Indians, Screen Rant and TV Fanatic.