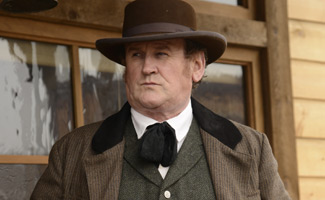 This week, The Chicago Tribune finds out what drew Colm Meaney to Hell on Wheels in the first place, while TV Fanatic interviews a Hell on Wheels Executive Producer about the episode directed by Twilight director Catherine Hardwicke. Read on for more Hell on Wheels news:

• In a Chicago Tribune profile of Colm Meaney, the actor says of Thomas Durant: “I don’t think I’ve ever seen a character as well written as this, certainly in the last 10 or 15 years I haven’t seen writing that has such a depth and such a clarity.”

• The Futon Critic also interviews Executive Producer John Shiban, who offers some teasers for the rest of Season 2 and compares the transcontinental railroad to today’s space program.

• The Journal Star lauds Hell on Wheels as “one of the best shows on TV, a worthy addition to AMC’s stable of incredible series.”

• Check out TV.com for a review of Season 2, Episode 6, “Purged Away With Blood.”