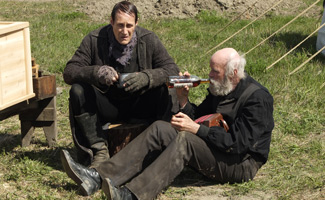 This week, Canada’s Postmedia News spotlights the Emmy-nominated composer of the Hell on Wheels main title theme music. Plus, Ireland’s RTÉ invites new viewers to “meet the cast” of Hell on Wheels. Read on for more Hell on Wheels news:

• Postmedia News is impressed by the “soaring note of quality” in the music category Emmy nominees, like Oscar-winning Gustavo Santaolalla of Hell on Wheels who’s up for the Outstanding Original Main Title Theme Music award.

• RTÉ provides a primer on the cast ahead of the debut of Hell on Wheels in Ireland last week.

• Code Name: Geronimo, starring Anson Mount, will be released on Blu-ray in the U.K. on Dec. 24, according to Blu-Ray.com.

• Ireland’s IFTN reports that Colm Meaney has returned home to Ireland filming scenes for The Yank, an Irish-American co-production.

• For recaps and reviews of Season 2, Episode 5, “The Railroad Job,” check out Assignment X, TV.com, TV Fanatic and The Voice of TV.