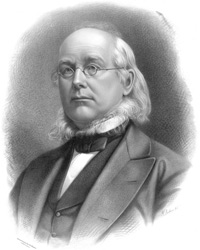 This Hell on Wheels Handbook item takes a look at real-life newspaper editor Horace Greeley to whom Reverend Cole insists on telegraphing his manifesto in Season 2, Episode 6.

“Go West, young man, and grow up with the country.” Historians debate how, when, and even if New York Tribune editor Horace Greeley uttered these famous words, but as the voice of 19th-century America’s most widely read newspaper, Greeley inspired thousands to heed the advice. A popular reformer, antislavery advocate, and co-founder of the Republican Party, the highly quotable Greeley was also an early proponent of the transcontinental railroad.

Greeley envisioned the developing West as a means for the urban poor of America’s eastern seaboard to improve their economic lot and, in turn, the country’s. He urged families to flee the vice and squalor of the cities for a new start in the West and lobbied for government financing of the railroad to get them there. A transcontinental railroad, Greeley insisted, would unite and civilize the country.

Despite championing freedom for all humans, Greeley shared the belief of many of his contemporaries that Native Americans were inherently inferior to Caucasians. He warned that the Native Americans faced extinction if they did not accept the inevitability of westward expansion. “God has given this earth to those who will subdue and cultivate it, and it is vain to struggle against His righteous decree,” wrote Greeley in 1859. Still, Greeley recommended that Native Americans “be treated as a truly Christian community would treat a band of orphan children.”

Corruption scandals during President Ulysses S. Grant’s first term prompted Greeley to run for against him in 1872, but Grant won reelection in a landslide and Greeley died not long afterward.

VIDEO: Inside Episode 206, “Purged Away With Blood”