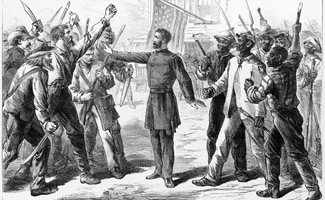 This week’s Hell on Wheels Handbook explains what Durant means when he says that the freedmen are “property” of the Union Pacific in Season 2, Episode 4.

President Abraham Lincoln freed America’s slaves with the Emancipation Proclamation, but he was assassinated before constitutional amendments outlawing slavery and defining citizenship could be ratified. Taking advantage of the situation, the former Confederate states enacted Black Codes to grant former slaves a few rights they had previously lacked but otherwise severely restrict their activities. The codes varied from state to state, but the Black Code of Mississippi barred interracial marriage, limited the choice of occupations, and prohibited freedmen from carrying firearms. At a time when unemployment in the South was rampant, one of the most oppressive provisions required freedmen to be gainfully employed at all times or face imprisonment for vagrancy.

These “vagrancy laws” resulted in the incarceration of many black citizens who could not afford to pay the fine once convicted. The court could, however, collect the fine by selling the convict’s services via a work contract. Breaking the contract could mean a return to prison even if the freedman found work elsewhere, effectively keeping slaves indentured even though they were technically free.

The two citizenship amendments ultimately passed, and along with the Civil Rights Act of 1866 they diminished the legal force of the Black Codes. Even so, echoes of the Black Codes could still be found in the Jim Crow laws that emerged in the late 1800s and prevailed well into the 20th century.