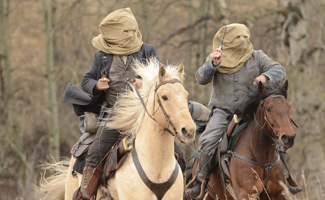 This week, Entertainment Weekly gives Hell on Wheels a glowing review, while The New York Times references the series in an article about reviving the Western. Plus, Virginia Madsen joins the cast for Season 2. Read on for more:

• Entertainment Weekly praises Hell on Wheels as “absorbing” and “visually impressive” in a review of the Season 2 premiere.

• The New York Times calls Hell on Wheels “complex” and cites the series as evidence that Westerns are back “in vogue” in an article on 1962’s Lonely Are the Brave.

• Deadline reports that Virginia Madsen will join Season 2 of Hell on Wheels for a three-episode arc.

• The Baltimore Sun profiles Common, who talks about how seriously he takes acting.

• TV Equals showcases a Season 2 trailer and raves, “If you were a fan of the first season…then you’re going to love the trailer for season 2.” RedEye has the trailer too.

• Dublin-based Herald.ie features Ireland’s own Dominique McElligott, observing that her career “has gone from strength to strength over the past five years.”

• The U.K.’s TVWise says TCM has renewed its licensing deal for Hell On Wheels.