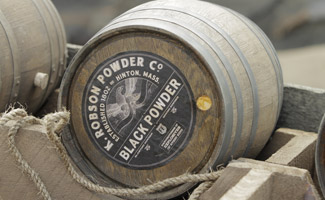 Ken Wills is the Property Master on AMC’s Hell on Wheels. In this exclusive interview with AMCtv.com, Wills talks about his most challenging creation and new props to look for in Season 2.

Q: What’s the most difficult prop you had to find for Hell on Wheels?

A: The hardest thing was the Griswold [gun]. There are only 3,600 of them made and the factory was only open for two years before it got destroyed, so trying to find an original one — you [almost] can’t do it… The train, as far as history and the making of it, was a good challenge. From what I’ve done with Westerns, this was the first chance for me to do anything with the railroad.

Q: We’ve seen the video about building the Hell on Wheels train — what are some props that we might not realize were built from scratch for the show?

A: For every actor, we have to build their belts and holsters and stuff like that. We had to build all the maps. We built every map for this show and they’re in just about every scene… We had to build a shotgun for The Swede which was called “Beauty.”

Q: Which props were most satisfying for you to create?

A: Anson’s character, Cullen, is probably one of the main guys that we really got some interesting stuff to do for — even the look of his belt and holster… There are so many props we’ve needed, but a lot of them I own. I’ve been doing this work for many years and I started collecting props when I was on Unforgiven… That’s really my favorite part of doing any kind of work in the industry.

Q: Cullen’s Griswold is iconic, as is Lt. Grigg’s saber and Elam’s “Arkansas Toothpick.” How do you determine what weapon a character uses?

A: The Griswold, right from day one, was named in the script. I also get an armorer… For Durant, we showed the producers some different looking pistols and they really liked the Pepperbox. This year, we’ve been using another gun that’s called the Ethan Allen, it’s a little tiny handgun that looks like a shotgun. With Durant, we never gave him any kind of big gun; it was always personal and something small. He didn’t have to use a big gun.

Q: The slop served to Eva and Lily looked disgusting. Is the food that we see on screen real? Have you tasted it?

A: Yes. We actually have a chef. We get all our food from her. It looks really bad, but it’s not. Dominique’s character, [Lily], has to eat all that stuff and Dominique is actually vegetarian so we have to make a tofu slop. [Our chef] goes back into the history books and looks up everything we use. She makes the biscuits, the hardtack — any of the real food that we need. The food is amazing, is what it is.

Q: You’re almost finished shooting Season 2. What are your first steps when you receive a script?

A: When I first get a script, I read it and break it down into whatever the actors are using in their hands. Being Prop Master means that I have to do everything that’s in front of camera that the actors touch, do, drink, shoot, etc.

Q: Any fun props we should keep our eyes open for?

Q: You also worked on AMC’s Broken Trail. Are there any similarities between the two Westerns?

A: Actually, they’re completely different… That’s why I like doing this industry. Every time you pick up a script, there’s something new. It’s never the same old job.

Click here to read an interview with John Blackie, Production Designer for AMC’s Hell on Wheels.