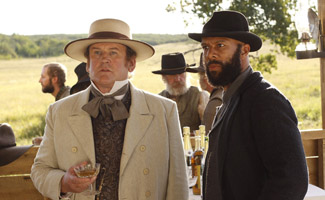 This week, the Wall Street Journal touts the DVD release of Season 1 and Colm Meaney is interviewed about his experience shooting Hell on Wheels. Read on for more Hell on Wheels news.

• The Wall Street Journal includes Hell on Wheels in a roundup of newly released TV shows on DVD, calling it a “violent, steamy Western.” Also announcing the DVD release are Television Without Pity and OK Magazine.

• In an interview with Digital Spy, Colm Meaney talks about playing Thomas Durant and explains that his character is “a guy with a lot of history, shady dealings, but he’s kind of on a mission.”

• The Calgary Herald claims Hell on Wheels is in the running for five awards and “could win big” at the Rosies, also known as the Alberta Film and Television Awards.

• Deadline.com reports that the Weinstein Company is in negotiations to purchase Anson Mount’s upcoming movie, Code Name Geronimo, about the hunt for Osama bin Laden.