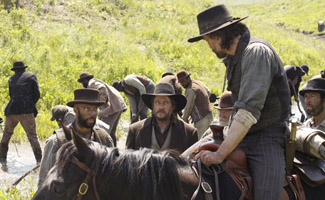 This week, Anson Mount appears in a video interview to discuss the 2012 Emmys, while Common is profiled for his humanitarian efforts. Read on for more Hell on Wheels news.

• Gold Derby talks with Anson Mount in a series of Emmy contender interviews. Mount says he tries to “just keep my head down and do my work.”

• The Chicago Tribune talks to Common about his music and his charitable work, calling him “exactly the kind of guy you would want your daughter to date.”

• In an interview with The Urban Daily, Common calls Hell on Wheels one of the most in-depth roles he’s ever played.