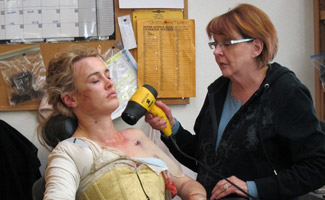 Gail Kennedy is the Makeup Supervisor for AMC’s Hell on Wheels. In this interview with AMCtv.com, she talks about how she created Lily’s arrow wound and realistic-looking blood.

Q: How do you balance authentic grime with making the actors look good?

A: You can create grime in such a way that it actually adds character to the face; it’s all in the placement and angle. Depending on who I’m putting the dirt on, we use a different placement and angle and we use different products to portray the lack of bathing that was inherent at the time. And, actually, the actors love looking as grimy as possible. Sometimes it’s hard to convince them to look good.

Q: What’s one of your favorite ways makeup enhanced a Hell on Wheels character’s story?

A: In particular, Lily’s arrow wound in Episode 2 and 3. My effects partner Dave Trainor and I created a silicone prosthetic that had a blood-line that covered a large portion of her chest, and it provided a realistic skin for her to stitch up in Episode 2 and for Cullen to perform the field surgery on in Episode 3. It was very visceral for the actors to have something so real to work with.

Q: Who gets more makeup department attention on this show — the men or the women?

A: It is pretty equal. The women have a very natural look, but creating a beautiful natural look is not as easy as one might think. It takes time, it takes a careful, delicate hand, and it takes the right kind of product. As well, in most cases, if it’s appropriate to the character, we’re keeping the women pale because they would not have had tans, and yet on the other hand, the men are very tan and grimy — with the exception, of course, of Durant and The Swede who are very meticulous in their grooming.

Q: Robin McLeavy told us about the technique for Eva’s chin tattoo. How did you discover what worked best?

A: Well, the chin is a complex curve and we knew that a flat stencil would not take. We took a cast of her face and then off that cast, we created a clear VacuForm replica and had the pattern cut into that. Then, my assistant Sharon Toohey airbrushed the design through it. Now, with this stencil, Sharon can [apply Eva’s tattoo] very quickly — speed was very important here.

Q: You’ve worked on several Westerns, including Legends of the Fall and Bury My Heart at Wounded Knee. What do you most enjoy about makeup for the era?

A: The period is very dirty and it’s inherently violent. We have so much creativity with the makeup in that realm. I love doing research and I love being challenged and all of the elements I learned from my past shows are contributing to this one.

Q: How did you create the “scalping” effect?

A: We did that in two pieces. There was a whole head prosthetic, and then on top of that was a wig attached, but it had a separate section and the actor could then cut and tear it off. We learned what we needed to have as far as a skin-like softness to it.

Q: Tell me about getting blood on Ruth’s face for the fight scene. Is it difficult to make blood look realistic?

A: My assistant, Rochelle Parrent, was armed with a large paintbrush that she dipped into the blood and flicked at her at just the right moment. And Rochelle has a great aim! [Laughs] One of things that is an issue with blood is that the palette of Hell on Wheels created by our production designer, John Blackie, and our cinematographer, Marvin Rush, has a desaturated look which takes out the redness of the blood. We have to compensate for that and we use a variety of reds and a variety of consistencies.

Q: How will the makeup evolve in Season 2?

A: The railroad is continuing to be built and there are different types of labor which will dictate what the performers look like. Getting into Season 2, I already know from reading a few scripts that we have some very exciting things coming up. I’m excited for the challenges and I can hardly wait to see what they throw at me.

Click here to read an interview with John Blackie, the Production Designer for AMC’s Hell on Wheels.