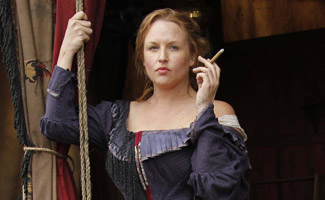 April Telek, who plays Nell on AMC’s Hell on Wheels, talks to AMCtv.com in this exclusive interview about fighting like a man and being the Pamela Anderson of the 1800s.

Q: Did you have any reservations about portraying a prostitute?

A: To be honest, it’s not my first whore. [Laughs] I have actually played a few from the 1800s [on The Immortal and in Supernatural]. It’s like my forte. I’m good at it. Must be something from another life.

Q: Nell is a tough, outspoken character. Do you relate to her?

A: I do. Being a blonde, blue-eyed gal growing up and knowing that I wanted to succeed in this business, you have to get pretty tough or you get walked all over. Pretty only goes so far. I knew that the women working in the 1800s in those situations had to be tough. I took on Nell like she has to fight like a man. If she doesn’t, she won’t get respect.

Q: Did you do any research to prepare for the role?

A: I did a lot. Robin McLeavy, who plays Eva, has this incredible book about the woman her character is based on who went through some hardships, and who ended up finding a safe haven in a whorehouse run by a character named “The Great Western.” She was this tall, redheaded, very strong matriarch, and so I sort of took that historical knowledge and ran with it with Nell.

Q: Nell is always spilling out of her dresses. What is your relationship with the wardrobe department like?

A: I told them, “Heck yeah, I’ll put that on!” There’s not a lot of modesty in Nell. Nell is an open book and she’s just going to put it out there. My husband jokes that the scene in Episode 4 where she comes running around the building chasing around the Irishmen peeping at the girls in the washtub, he thinks…it’s like the Baywatch shot of the 1800s. It’s like Pam Anderson running on the beach, but it’s Nell! [Laughs]

VIDEO: Behind the scenes of Episode 4, “Jamais Je Ne T’oublierai”

Q: Were you choreographed for the scene in Episode 9 where Nell gets flogged?

A:
We did choreograph it. It’s interesting though… I was sitting at lunch with [an executive] from AMC and I said, “I’m so excited for my scene after lunch!” And she said, “Your beating scene?!” And I said, “Yeah, because when you’re at your most vulnerable, that’s when your true character comes out.” A lot of other actors might play that scene as a victim, but I really played her like a fighter. I did not go down.

Q: Christopher Heyerdahl is frightening on screen. Is he intimidating in real life?

A: No. He’s the pussycat of all pussycats.

Q: Is there actual physical contact between you two in that scene?

A: Yeah, it’s impossible to avoid. But it’s incredible the ways there are to fake things; it’s incredible how far away you can be from actual touch when the camera angle is set in a certain way. And at the end of the day, [Christopher Heyerdahl] got me up and said, “Oh my god, you’re strong. How are you?”

Q: Are fans going to be seeing more of Nell in the second season?

A: I hope and pray they use me as much as they can. I hope I’m in every episode!

Q: Where would you like to see the character go in the series?

A:
I think a woman like her would be a really wonderful confidant for some of the stuff that these men are going through… A woman in that day and age might just have to use that knowledge at times to get where she needs to go.

Click here to read an interview with Christopher Heyerdahl, who plays The Swede in AMC’s Hell on Wheels.