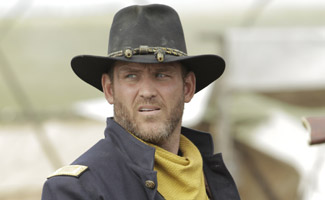 Ty Olsson plays Union soldier Lieutenant Griggs on AMC’s Hell on Wheels. In an exclusive interview with AMCtv.com, Olsson talks about what it’s like to be decapitated on screen and his struggles to play a “dark and dirty” character.

Q: How complicated is it to play a scene in which you’re decapitated?

A: I’m not sure whether it’s good fortune or bad, but I’ve died many times on screen. So I have experience, but this particular death was unique. I had to wear this goofy green-screen Spandex suit so that later on they could do the computer graphics to show the beheading. We had to block everything exactly, like having the sword swing the right way to lop off my head. I was in a full-body suit, and there was a fake head, which after it was cut off was carried around in the next episode.

Q: Was there a lot of morbid humor on set that day?

A: Everyone got a kick out of seeing me in that goofy suit. It’s about five sizes too small and there’s no hiding anything when you’re in that Spandex fluorescent green. It was one of those crazy things you do in show business that make it fun.

A: When Anson Mount’s character and mine are arguing about a Civil War battle and whose side kicked whose ass, that was one of those moments when you can really connect with another actor. No guns or horses or crazy blocking or a dozen people. It was just those two guys, and it was all about how they affect each other. Their conflict made it work.

VIDEO: Behind the scenes of Episode 9, “Timshel”

Q: Is it fun playing a character with Griggs’s attitude?

A: You don’t get that much opportunity in life to go that dark and dirty, so Griggs was a fun guy to play. And Eddie Spears and Anson and Common and I had good chemistry — I rubbed them the wrong way appropriately! I spoke some of my nastiest lines ever in Hell on Wheels.

A: Definitely. You wanted to put a bar of soap in your mouth after you were finished. In that scene when we’re mounting up to ride after Pawnee Killer, I had to say this one line for I don’t know how many takes… It was the kind of line you choke back afterward.

Q: What’s the most interesting thing you learned about the Civil War from being in Hell on Wheels?

A: The interesting thing about the show for me was how it reversed the roles when it came to race. Griggs was a Northerner and clearly had the racial undertones going on the whole time, but Anson’s character, though from the South, was somewhat more comfortable with race. On a practical note, the sun was beating down in Calgary the summer we shot there, and I learned that those wool outfits Civil War soldiers wore were hot.

Q: What was it like working on the set?

A: They had the main town set up in middle of the Tsuu T’ina Indian reserve. When you have all the water from the rain, and the muck, and the tents, there’s no better way to get an authentic, middle-of-nowhere feel than that. It’s easy to drop into your role when you’re walking through half a foot of mud.