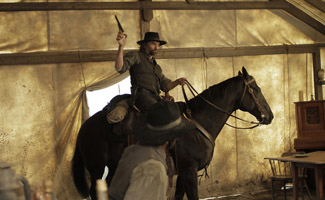 Anson Mount snags yet another movie role this week, and a Colm Meaney flick kicks off an Irish film festival in New York. Read on for more Hell on Wheels news.

• Deadline Hollywood reports that Anson Mount has been cast alongside Danny Glover as a villain in Supremacy, a movie about a white supremacist who takes a black family hostage.

• In an article about the Craic Festival in NYC, the Daily News calls Colm Meaney one of “the very best Irish actors working.” Meaney’s indie film Parked opened the festival.