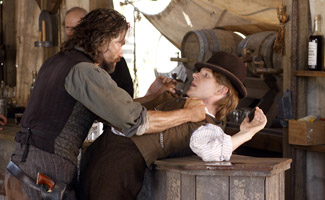 Anson Mount turns 39, while the media trains a spotlight on native Australian Ben Esler (Sean McGinnes) as AMC’s Hell on Wheels begins airing Down Under. Read on for more Hell on Wheels news.

• The Boston Globe reports that Anson Mount turned 39 this week. (He shares a birthday with Sean Astin and Julio Iglesias.)

• The West Australian newspaper talks to Aussie actor Ben Esler about playing Sean McGinnes. “Sean is thought of as an unassuming little Irish kid but really he is someone who knows how to manipulate people,” Esler says.

• Esler also talks to Australia’s Sunday Telegraph and IF Magazine, about his fake Irish accent. “We would go to the Irish pub and try it out,” he says. “Either it worked or they were very polite.”

• According to Rap-Up, Common showed his basketball skills at an NBA All-Star Celebrity game in Orlando.

• The Daily Blam reports on Colm Meaney‘s role in the film adaptation of Bel Ami, alongside Robert Pattinson and Uma Thurman.