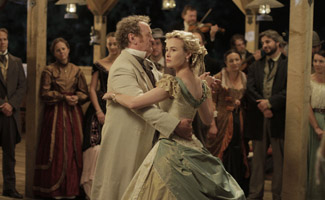 This week, Colm Meaney joins the cast of a new Hollywood thriller and Dominique McElligott is singled out for her Irish beauty. Keep reading for more.

• The Hollywood Reporter announces that Colm Meaney has joined the cast of The Occult, a thriller about a religious cult. His co-stars will include Rufus Sewell and Anne Heche.

• CBS Local in Boston names Dominique McElligott one of the ten most beautiful Irish actresses. “She’s alive and gorgeous and starring as Lily Bell in AMC’s Hell on Wheels,” the station states.

• According to The Flick Cast, Australian horror film The Loved Ones, starring Robin McLeavy (Eva), has been picked up by American distributors and will soon be coming to a theater near you.