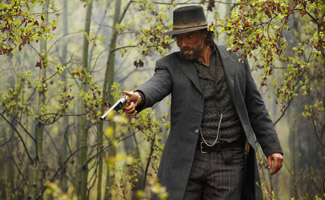 This week, Anson Mount gets acting props from the Los Angeles Times and Common scores a role in an upcoming movie. Keep reading to find out what else the media has been saying about Hell on Wheels and its stars.

• In an article about actors who overlooked by Oscar, the Los Angeles Times cites Anson Mount in Cook County as “impressive — and chilling.”

• BET.com reports that Common has lined up a new acting project. Now You See Me, an FBI thriller to costar Morgan Freeman, Jesse Eisenberg and Mark Ruffalo.

• Stuff.co.nz in New Zealand praises Hell on Wheels as a quality “drestern” (a drama-western), and singles out Anson Mount: “The actor peering from underneath the wide brim of his hat and bushy beard looks like a young Clint Eastwood.”