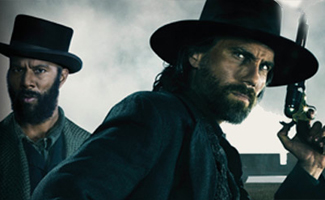 Linda Cohen is the Music Supervisor for Hell on Wheels. In an exclusive interview with AMCtv.com, she talks about using music to create a sense of authenticity and what musical subtleties you might have missed during Season 1.

Q: Do you do most of your work before, during or after the filming of the series?

A: It starts during because, while they’re shooting, sometimes there is on-camera music that you have to think about, and then when you get into post-production, we’re putting music against picture too. So it’s all throughout. It starts in the writer’s room, actually — if there are things written into the script, we start looking at it there.

Q: How do you decide when to use original vs. pre-existing music?

A: We have a lot of music that’s written for us that is “period-sounding” music. In that time period, there was a lot of fiddle and banjo playing and Irish music that was all very organic to the time period, the culture, and the types of people that were there in Hell on Wheels. Some of that stuff that is pre-existing we put in, but I also commissioned some people to write music in the style of our show so we’d have more variety to choose from.

When we use song, we’re very deliberate about only using songs that fit the show organically. Even if they’re contemporary, they have that edgy and raw feel to it. We did, on a couple of occasions, have artists record music for the episode.

Q: “Timshel” is the name of an episode but also the name of a Mumford & Sons song in that episode’s opening scene… How did that work out?

A: It happened organically. John Shiban, who wrote and directed that episode…wrote a teaser for the episode which was unlike any other in the show, where it was all going to be set to music. Not entirely like a music video, but sort of. The more he listened to that song, the more he thought it was really appropriate, especially the name Timshel which means “Thou Mayest”. It started to become a themed episode and it all fell into place.

VIDEO: Behind the scenes of Episode 9, “Timshel.”

Q: You’ve worked on many productions, including Best Picture Oscar-winner No Country for Old Men. How did that inform your work here?

A: Each project you work on is unique in its own way and you have to dive into what their needs are. This period is so authentic with music and Hell on Wheels uses music way more than No Country for Old Men did. It afforded a lot more opportunity to dive in to what was going on and what was right in that period. It provided a lot more wealth of options.

Q: Did you get a chance to work with Common at all?

A: We did listen to songs from his new album, which were terrific, and we’re trying to find ways to tie that in [for Season 2].

Q: Will there be significant differences in musical styles for Season 2?

A: We’re really pleased with the way music worked in the first season and are really proud of the way we incorporated contemporary songs and authentic music from the period and gave it a very rich sound overall. I hope we can do more of that great work in Season 2.

Q: What can viewers listen for on subsequent Hell on Wheels viewings that they might not notice the first time around?

A: What’s interesting about the show is a lot of times there is music playing. You don’t see it on-camera, it’s off-camera, but as you’re going through Hell on Wheels, you might hear a guitar riff in the background or some music coming from the saloon. It isn’t obvious to you, but it’s part of the overall landscape of what you’re hearing and seeing, and we like using music in that way to make it feel real. I would just listen to the overall flavor and ambiance of Hell on Wheels and you might pick up on some things you’ve missed.

Click here to read an interview with John Shiban, the Hell on Wheels executive producer who wrote and directed Episode 9, “Timshel.”