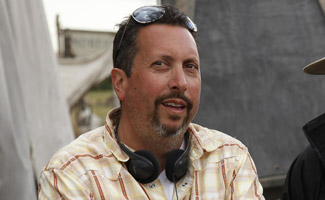 AMCtv.com talks to John Shiban, the Hell on Wheels executive producer who wrote and directed Episode 9, “Timshel.” Shiban dishes on the origins of the show’s beheading and turning an attack scene into a music video.

Q: You wrote and directed Episode 9. Which do you prefer, writing or directing?

A: I really enjoy directing a lot. It’s probably one of the most stressful things you can do, but it’s so rewarding when things go well. At the same time, when I write, I’m kind of directing in my head at the same time, so in a way it’s kind of the same job.

Q: When you wrote Episode 9, did you include anything for yourself as a director?

A: I always attack stories visually, whether I’m writing or directing so I’m always looking for ways to bring the story to life with compelling and interesting pictures. When you know you’re directing, you try to find really cool set pieces to do. For the attack scene I wanted to find a way to do Indian attacks in a way that I hadn’t seen before. We pitched out the idea of almost making it like a music video.

Q: Tell me about the beheading scene and how that came about…

A: We had talked about a beheading for a different storyline earlier, but when Reverend Cole had a speech in Episode 4 where he talks about brutality, it seemed natural that this man who is capable of that kind of violence would use that violence to save Joseph. We tend to forget in our modern times how dangerous and how prevalent death was back then. and I wanted to have a moment where the audience goes, “What the hell?” Nobody but Tom Noonan could pull that off with such grace.

VIDEO: Behind the Scenes of Episode 9, “Timshel”

Q: Is there a character you particularly like writing dialogue for?

A: Cullen. He’s such a Clint Eastwood-type man of few words; he doesn’t give big speeches, but what he says carries a lot of weight, so he has been really interesting to write for.

Q: When you’re writing dialogue in the writers room, are you also acting the script out?

A: We actually do a fair share of acting in the writer’s room. I’m not an actor in any sense of the word, but I find it really helpful to actually say what’s on that page and hear it. Even if it’s poorly acted, the dialogue can come through. We really should videotape all the acting that goes on in there.

Q: Does anyone do a particularly good impression of characters in the show?

A: The Swede is so fun! Everybody has tried at one point to capture his voice, but nobody can get it like Chris Heyerdahl. So much of the character’s turn of phrase is in the unique way he delivers.

Q: Durant is a real-life inspiration. Are any other characters based on real people?

A: Doc Durant is the only one by name. Eva is based on Olive Oatman, but they have slightly different back stories. We actually did a lot of research as a group — we read firsthand accounts written by former slaves, and some Civil War histories and stuff like that. We wanted the show to feel real, and the history helps us expand these characters.

Q: You’ve been a producer for Breaking Bad. Did that show influence you here at all?

A: Absolutely. We talk less about making a Western on the show than making a character drama like Breaking Bad, which is funny because in the room for Breaking Bad we talk about it as a Western. The look and the feel of the show has definitely been inspired by Breaking Bad as well; Calgary has really become a character in the same way that Albuquerque is. In Cullen and Elam we kind of made an interesting and unlikely partnership that was definitely inspired by Walt and Jesse.

Q: How is Hell on Wheels similar to other shows you’ve been part of?

A: A period drama is in some ways like doing a science fiction show. You can’t just go out and buy clothes and shoot in Los Angeles, because you’re making a whole different world. Everything has to be made to look right for the historical references and everybody has to bring their creativity and vision to it.

Click here to read an interview with Tom Noonan, who plays Reverend Cole on AMC’s Hell on Wheels.