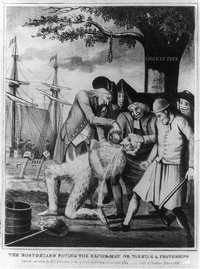 In the Hell on Wheels Handbook, AMCtv.com takes a closer look at the tarring and feathering that Sean and Mickey arrange for The Swede in the Season Finale.

Tarring and feathering is a gruesome form of mob vengeance that began during Europe’s Middle Ages. Its emergence in the United States dates back to the American Revolution, when Patriots inflicted it on British Loyalists and tax collectors. The practice flourished into the 1800s and was commonly used on the American frontier, where community members meted out the punishment as a way to drive the victim out of town or teach a lesson.

Tarring and feathering is primarily meant to humiliate. After the victim is stripped down to his waist, the mob proceeds to paint the victim with pine tar (which does not burn) then pitches feathers or forces the victim to roll in the feathers until they stick. As a final indignity, the mob chases/parades the victim through the streets.

Tarring and feathering was never a legal form of punishment, but citizens frequently used it as a form of vigilante justice. “Such a process may be treated as a jest,” wrote historian Philip Henry Stanhope in 1851, “but attended as it was too commonly with blows and violence, it put its victims to considerable suffering as well as to shame.”