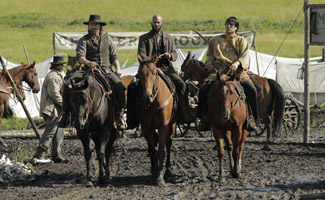 This week, the Chicago Sun-Times praises Hell on Wheels‘ Western “twist,” and Common is singled out for his strong performance as Elam. Read on for more Hell on Wheels news.

• The Chicago Sun-Times credits Hell on Wheels with helping to modernize the Western genre on television.

• The Kansas City Star [no link] calls Common one of 2012’s “rising stars,” bringing “dignity and restrained fire to the part” of Elam.

• Media outlets continue to report on Hell on Wheels‘ Season 2 renewal, including the New York Post, C21Media and World Screen.

• The Calgary Herald puts the spotlight on the Canadian production company behind Hell on Wheels and other Westerns such as AMC’s Broken Trail.

• Shockya names Hell on Wheels one of the top 10 television shows of 2011, calling it a “gritty, ultra-realistic take on the old West.”