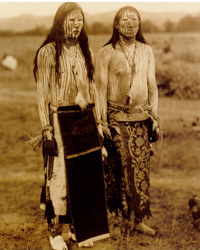 In the Hell on Wheels Handbook, AMCtv.com delves into the backstory of Native American warriors like Pawnee Killer and his band of raiders.

The Dog Soldiers were the most powerful and militant of the Cheyenne tribe’s six military societies. The society came to prominence during the Indian resistance against American expansionism in the mid-1800s.

While some Cheyenne council chiefs were open to diplomatic talks with white leaders, Dog Soldiers preferred to respond to expansionism with raids and battles. “The Dog Soldiers attracted all those who were unequivocally hostile to the ‘encroachments’ and who chose war as the means to repulse this invasion of Indian country,” writes historian Richard S. Grimes.

Named after a Cheyenne legend in which dogs transformed into fierce fighters, Dog Soldiers wore large feather headdresses with bird-bone whistles around their necks. The most elite Dog Soldiers wore “Dog Ropes,” which were sashes made from buffalo skin and decorated with porcupine quills, feathers and beads. During battle, the soldier would stake his Dog Rope to the ground and fight from that location through the end of the battle. He could not leave the site until the battle was over and a fellow soldier had unpinned his sash.

The Dog Soldiers, with their strict military creed and effective war tactics, commanded a respect not unlike the respect accorded to Navy SEALs today. As their influence in Cheyenne society grew, they began to undermine the authority of their own council chiefs. In 1860, they refused to sign a treaty drafted by the Commission of Indian Affairs that would have forced the Cheyenne onto reservations. Intent on retaining their lands, the Dog Soldiers conducted raids, especially along the Platte River. “They were clubbed together as a band of braves, and the chiefs could not control them,” Colorado Gov. John Evans testified to Congress on Mar. 15, 1865.

Though they fought fiercely, it would be a losing battle for the band of warriors. American expansionism eventually prevailed and, during the mid-1870s, the power of the Dog Soldiers waned on the Great Plains. However, the society still exists to this day, with Dog Soldiers even serving in the U.S. Military.