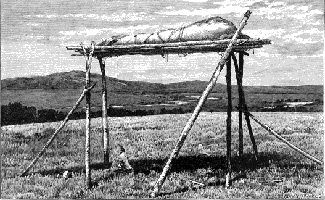 Thanks to the Hell on Wheels Handbook, you can learn more about Joseph Black Moon’s burial ritual for Pawnee Killer in Episode 9.

During the 1800s, the Cheyenne  laid their dead to rest in the trees. In the absence of a suitable tree, mourners constructed a scaffolding with four wooden posts staked into the ground. A wood platform for the body was then laid across the posts, resulting in a structure, typically 8 to 10 feet high.

The corpse, fully shrouded in cloth (ideally, a red or brightly colored blanket) was accompanied by personal items — pipes, weapons and, even, the dead person’s hair. Mourners then placed the body on the raised platform amid a chorus of wailing women.

Relatives cut themselves as a way to show grief. Indeed, one frontiersman wrote about a Native American woman who “was about to cut off a finger in evidence of her grief for the loss of a child,” but who “on further entreaty was brought to merely making a cut and letting out some blood.” The body remained on the scaffolding for months, until the bones were left, at which point the tribe buried the remains underground or placed them in an ossuary. (If the body had not fully decomposed, they sometimes scraped the bones clean.)

The Cheyenne placed the body high above the ground because they believed it would accelerate the soul’s passage into the spiritual after-life. On a more pragmatic level, it also prevented wild animals from picking at the corpse.