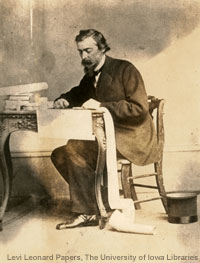 In the Hell on Wheels Handbook, AMCtv.com takes a closer look at the real history behind Thomas Durant’s infamous stock scheme in Episode 7.

Against the President’s orders, Durant instructed his engineer Peter Dey to start the rail line in Omaha, Nebraska, across the river from Council Bluffs. Dey presented him with several route options, only for Durant to shift the terminus again to De Soto, which lay 20 miles north of both Omaha and Council Bluffs. “It is difficult to make surveys without forming some idea of what you are doing and what it is for,” a bewildered Dey wired to Durant. It turns out Durant’s decisions may have been motivated not by pragmatics, but by a highly profitable stock scheme.

Around the same time, Durant announced that he would be connecting the Union Pacific with the Mississippi and Missouri (M&M) line, in which he owned stocks. His announcement drove M&M stock price up to $149 per share, writes David Haward Bain in Empire Express. Durant then quietly sold his inflated M&M stock and bought shares in Galena and Chicago Union, which owned the Cedar Rapids and Missouri (CR&M) line to the south. He subsequently announced that the Union Pacific would be connecting with the CR&M line, not the M&M. The latter’s stock dropped to $111 while Galena shot up. Durant sold his Galena stock and re-bought M&M at a depressed price.

Durant’s stock maneuvering, a variation of the sort of insider trading that more recently landed Martha Stewart and Raj Rajaratnam in jail, earned Durant a cool $5 million. In a March 1864 letter written by Nathan Dodge to his brother Grenville Dodge, then chief engineer of the Union Pacific, Nathan observed, “In other words, he gets back home and makes in the round trip for him and his friends $5,000,000. It is the smartest operation ever done in stocks and could never be done again.”