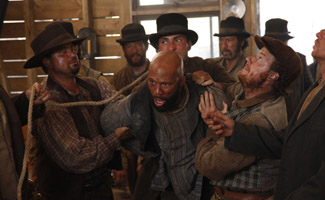 Common makes the interview rounds this week, while Forbes says the series is the first of a new trend toward televised Westerns. Read on for more Hell on Wheels media buzz.

• In interviews with MTV and Rolling Stone, Common praises Hell on Wheels for addressing complex racial and economic barriers.

• Forbes mentions Hell on Wheels in an essay about the resurgence of Westerns on television, including a photo of Cullen Bohannon from Episode 5.

• The Chicago Tribune suggests IMAX documentary Rocky Mountain Express for viewers whose interest in railroad history has been stoked by Hell on Wheels.

• Hell on Wheels makes the Best of 2011 list at Yidio, which declares the show has “limitless promise.”

• Dominique McElligott opens up to AssignmentX about snagging the role of Lily Bell at her first-ever L.A. audition.

• AssignmentX also talks to Hell on Wheels co-creator Joe Gayton about casting Hell on Wheels: “We always wanted to find our George
Clooney before he did ER and I think we got him [with Anson Mount].”

• Common stops by 106 & Park to spread the word about his new rap album, The Dreamer/The Believer.

• Also putting in a talk show appearance is Anson Mount on Fox & Friends [no link].

• Zap2It recaps Episode 7, “Revelations,” noting that “Doc, of course, is now crushing on [Lily] pretty hard, as am I.”