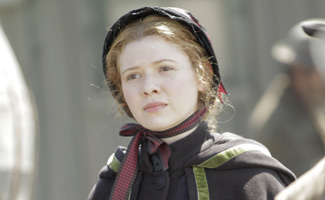 In an exclusive interview for AMCtv.com, actress Kasha Kropinski, who plays Ruth on AMC’s Hell on Wheels, reveals how the boxing scene destroyed the set and details how a perfect blood spatter is created.

Q: Tell me about shooting the boxing match between Cullen and Elam. What was that like?

A: I’m really not a boxing fan or into sports, but the scene itself was so incredible that I found myself wanting to cheer on Anson [Mount, who plays Cullen], and Common, [who plays Elam]. Everyone was screaming and shouting and smoking and pretending to drink — it really felt like an actual fight. It became so suffocating in there they actually had to cut holes in the roof.

Q: How did you get that fake blood on your face?

A: That was quite funny because we actually had to do that four or five times. Our makeup woman had a paintbrush that she would dip in fake blood and then flick at me. For some reason the blood wouldn’t spray adequately and [the director], Adam Davidson, kept saying, “We need more!” For the last take, she dunked the brush into the bucket and threw it at me. We finally got enough blood on my face — it got in my eyes and hair, and it was not easy getting it all out.

Q: You have a history as a serious ballet dancer. Have those skills been useful on the set?

A: Well, I don’t want to give anything away, but it certainly comes in handy later this season: there’s a big dance scene. [We] had a dance rehearsal that was three hours long where we learned the Polka and the Waltz before shooting the scene. I tried to play down the fact that I was a dancer a bit. We rehearsed it over and over again, but when we got on set, we actually didn’t do any of our choreography!

Q: Does your ballet training translate to acting, particularly for your character and this show?

A: Training as a dancer gives one discipline, focus and determination, which are all beneficial qualities for an actor. And for Ruth — the posture and the carriage of ballet is probably sort of Victorian in terms of elegance and grace, which was more valued back then.

Q: With all the dirt and muck on the ground, it must be difficult to stay graceful!

A: It was so visceral to actually be knee deep in mud and surrounded by dirt in this really murky atmosphere where we were filming literally out on the prairie. That coat I’m wearing when I show up at the camp is 100% authentic wool and it was incredibly heavy. That day was one of the hottest days we had on set temperature-wise! The wardrobe women and I would always wonder how women did this by themselves — the corset, the petticoats, the dress and skirt and boots. It’s a lot of stuff to put on.

Q: What kind of sources did you look to for help portraying Ruth?

A: It’s funny — in elementary school I had a teacher who was a complete Civil War fanatic. She made us do reenactments and military drills on the playground. One day she divided the classroom into groups of North and South, and she called me over and told me that I was to be a spy for the other side. But I was completely hopeless at it.

Q: Have you drawn on any other life experiences for your role on Hell on Wheels?

A: Ruth definitely tries to be a good and kind person and obviously that’s something I try to do in my own life. She’s has been through an immense amount of pain and sorrow and its sort of cathartic to play these emotions. These aren’t things I would necessarily experience in my life — but the best way to do that with minimal pain is to act it out.

Click here to read an interview with Common, who plays Elam Ferguson on Hell on Wheels.