VIDEO: Who Is Joseph Black Moon? 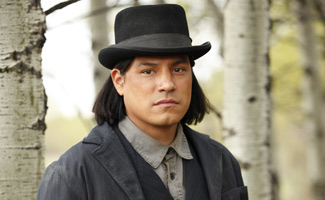 In this exclusive interview, AMCtv.com talks to Eddie Spears, who plays Joseph Black Moon on AMC’s Hell on Wheels. Spears talks about a big first on set and how the show taught him about Cheyenne warrior traditions.

Q: What was the biggest surprise for you performing on the show?

A: My haircut! The most surprising thing to me was to hold my braid in my hand! I only had one haircut before and that was a braid. I never had that feeling before where you walk out with a new haircut: it’s like a new set of clothes. My friends had never seen me with short hair before, either. I got a lot of calls and emails. I still have [the hair] — I took it to ceremony and then burnt it.

Q: What reactions have you gotten to the show from people back home?

A: Hell on Wheels is unbiased and that’s what they like about it. It’s definitely not like your father’s Western, a cowboy versus Indians type of thing. It’s kind of got an in your face raw feel and it shows the clash of the cultures while it doesn’t really pick a side. I hope that a lot of people learn from the history and all the stuff people have gone through — hopefully people wake up this time.

Q: I read that you’re an avid outdoorsman. How have those experiences come on handy on set?

A: I don’t think anything can prepare you for how cold that water is up there! That glacier water was freezing during that baptism scene at the beginning of the season. I’ve gone elk hunting a few times and I guess it kind of prepped me for the show, because I was used to tramping around in the mud and [I was] born and raised on horses and stuff like that.

Q: Did you learn how to shoot a bow and arrow for the show?

A: I’ve shot bow and arrow my whole life… I got in [an archery] competition and I took first in standstill, actually. Ever since then I’ve been shooting bow on and off and it definitely came in handy in this role.

Q: What about the pious clothes Joseph wears? Do you enjoy playing a religious character?

A: I like the challenge of it. You know, mostly it seems like I’m always playing a pissed off Indian, but Joseph has a lot of character and a lot of places to go. Indians normally play the victims — but Joseph gets everybody to root for him, and I like that about it.

Q: How is Hell on Wheels’ treatment of the Native American situation different from others you’ve encountered?

A: They show a lot of respect to the culture on the show. Because I’m Lakota not Cheyenne, they came through with aboriginal advisers, making sure the outfits, regalia and the ceremonies and war paint were authentic. They were very respectful to the Sun Dance and the purification ceremonies that we believe in. We’re not all just one tribe: there are over five-hundred recognized tribes out there and we all have our own beautiful story to tell. And Hell on Wheels lets us tell it.

Q: What’s different about the Cheyenne culture compared to Lakota?

A: I’ve learned some more about how they dressed, their languages, warrior societies, and what Joseph would be going through and the responsibilities he would have. But Cheyenne and Lakota — they’re not so different, the way they believe and the way they prayed, and the way they hunted and gathered. Also, the way they believe in the family structures is the same. The language was totally foreign, however. It’s not like Lakota at all. I hope I bring honor to the Cheyenne people and that I did my best to respect their culture and language.

Click here to read an interview with Kasha Kropinski, who plays Reverend Cole’s daughter Ruth on Hell on Wheels.