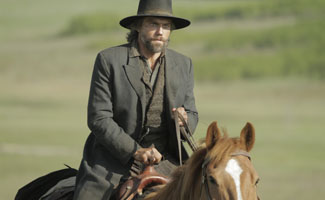 This week in Hell on Wheels news, Anson Mount chats with NYmag.com about “praying for a Western” while Common discusses the perfect timing of the series premiere. Keep reading to see what the Hell on Wheels stars have to say about the series.

• Anson Mount opens up to NYmag.com about playing Cullen Bohannon and fulfilling his desire to do a Western. “I grew up with a plastic Sheriff’s badge and a plastic gun, and I played cowboys and Indians from the time I was 4 or 5 years old,” he says.

• In an interview with CraveOnline.com, Common talks about juggling Hell on Wheels with his music and writing careers.

• AssignmentX.com interviews Meaney about Hell on Wheels and his character Thomas Durant: “In a way, this guy is a bit like Halliburton,” Meaney jokes. “He’s going to milk the government for all he can.”

• Florida Today talks to Executive Producers Tony and Joe Gayton about growing up in Florida and creating Hell on Wheels.

• The Independent includes Hell on Wheels in a story about the re-emergence of Westerns on TV. “The reason that people are so attracted to the Western is that these people were tough,” says creator Joe Gayton.