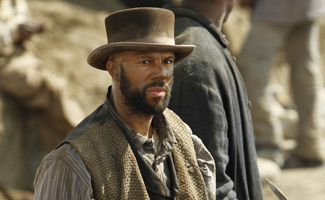 Critics are commending Hell on Wheels for both its cast and its production values, while series stars Anson Mount and Common make the interview rounds with several major publications. Read on for more Hell on Wheels news.

• USA Today visits the set of Hell on Wheels to interview stars Anson Mount and Common, who calls the show “The most fun I’ve been having creatively for a long time.”

• The New York Post praises the men of Hell on Wheels, calling Cullen Bohannan an “Old West answer to Draper.”

• At the Hell on Wheels premiere in Los Angeles, Anson Mount jokes with Variety about the realities of working on a Western set.

• Bloomberg.com commends the Hell on Wheels costume design, calling the clothing “the envy of any Steampunk fashionista.”

• The Detroit News profiles Common, who talks about the process of preparing for his role as a freed slave.

• The Root has a slideshow of Common‘s many roles as an actor, model and rapper.

• C21Media.net reports that the U.K. arm of Turner Broadcasting will air Hell on Wheels in 2012.