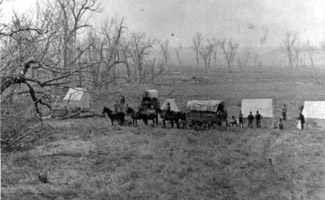 As the railroad thundered westward, a mobile city of saloons, gambling houses and brothels known as Hell on Wheels would follow in its wake. These end-of-track towns sprouted along the railroad’s route, and prospered from the hard-earned cash of the Union Pacific laborers.

Beginning in Omaha, Nebraska in 1865, the first Hell on Wheels town grew from almost nothing to nearly five thousand inhabitants by the winter of 1866. From there, Hell on Wheels would continuously shift several miles west, moving along with the leading edge of the railroad every month or so, reassembling their flimsy canvas tents in a single day’s time. By 1867, this portable town had moved all the way into Julesburg, Colorado — a town formerly comprised of exactly forty men and one woman that would almost instantaneously grow to four thousand.

Stopping for no one, Hell on Wheels thundered forward into Cheyenne, Wyoming–immediately garnering the vice-ridden title of the “greatest gambling place to ever be established.” A month later, again ceaselessly onward into Rawlins and Benton, Wyoming. Then forward to Bear City, Utah. Then to Corinne, Utah. And ultimately to Promontory Summit — the site of the last Hell on Wheels was fittingly the site of the “golden spike” — over one thousand miles from its humble beginnings in Omaha.