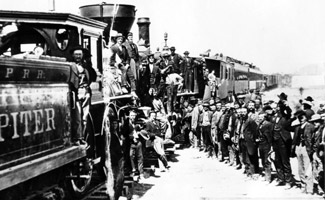 Work in the mid-19th century was different from work at the beginning of the 21st century. Nearly everything was done by sheer muscle. Every backbreaking task — laying ties, making the grade, spiking in rails — was all done by hand. And the Union Pacific found their primary muscle in the form of Irish Immigrants.

Many were young ex-soldiers from both the Union and Confederate armies, unmarried Irishmen who had no compelling reason to return home after Appomattox. They had caught the wanderlust during the war and set out to take on the next impossible task — to build a railroad across wilderness, their only compensation being a couple dollars a day in wages, and if they were lucky, time for a glass of whiskey back in Hell On Wheels.

Some others had just arrived in America. The Union Pacific sought out and signed up thousands of Irish workers through agents in New York and Boston and shipped them west at terrific expense. Despite some drunkenness, strikes, and slowdowns, the imported Irish workers proved a necessary answer to the renowned Chinese work ethic driving the Central Pacific’s construction. If it were not for these Irish boots on the ground, toiling, bleeding, and sweating day in and day out, Thomas Durant’s vision for a transcontinental railroad may never have come to fruition.

Check back tomorrow to learn about another real-life inspiration behind Hell on Wheels, AMC’s newest original series.