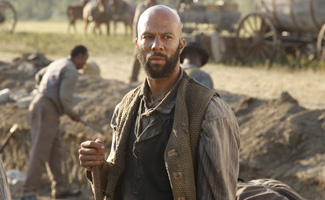 Actor and Grammy-nominated musician Common plays ex-slave Elam Ferguson in AMC’s new series Hell on Wheels. He spoke with AMCtv.com about the realities of the Old West and what his character’s theme song might sound like.

Q: What did you learn from your research for this role?

A: I definitely learned a lot of U.S. history, especially dealing with the struggle of black people at that time.

Q: Was there anything shocking to you?

A: Just some of the working conditions. A lot of slaves worked from the time that the master blew the horn, when the sun was coming up, to sundown. Sometimes you’d have a five-minute lunch, if that, and then they’d throw it all in this bucket and you gotta eat what they give you. And then you work throughout the whole day, no matter what the weather.

Q: How did you prepare for this role?

A: I did a heavy-duty amount of research into our history and the history of African people once we arrived on the shores of America. But I must say some of it is just innately in my soul. I am really connected to this struggle, beyond even any research. … It was definitely more emotional because of what occurred during those times and how some of our people were treated.

Q: You look like you’re breaking a sweat in the digging scenes. Is that real?

A: Oh yeah. When you’re out there in the sun, swinging that pickaxe, you’re gonna sweat. When it’s raining and it’s muddy, it’s gonna be harder to walk through the mud. Those natural elements are there. We’re doing the labor and, man, some of the work that people did back then was tough.

Q: What was it like slitting someone’s throat? Was there specific fight choreography?

A: The night we did it, it was raining real hard. It was cold. We didn’t know if we were gonna get [the shot], so I just had to instinctively do what felt right as far as slitting his throat. This was coming from a place of, “Man, he’s just basically killed my half-brother,” so Elam was definitely seeking revenge. And by the same token it helped save somebody else’s life. So it was a situation where it came pretty naturally to just go out and slice his throat.

Q: Was the horse cooperative in the scene where it kicks Elam’s friend in the head?

A: We had to do a few takes. A lot of these horses are trained well and some have been in films and TV work, but… to get a horse to rise like that, he’s gonna kick the way he wants to kick. We had a stunt coordinator to make sure everyone was safe in that process.

Q: If you could compose a theme song for Elam, how would it go?

A: I would definitely draw from a Negro spiritual. It would be a song that definitely has soul and spiritualism but also has hope, like some of those songs that end up being gospel songs. Like I would say “Sometimes I Feel Like A Motherless Child,” but I would want it to be even a more hopeful song, like we’re gonna make it through all this. We’ve been through all this struggle, and we’re gonna see the morning, you know?

Q: How do you think you would act in Elam’s position?

A: I could easily say I would do this and do that, but that’s a difficult place to be in. I believe I would fight for my freedom and stand up for what I believe in, but you never know until you’re put in that situation.