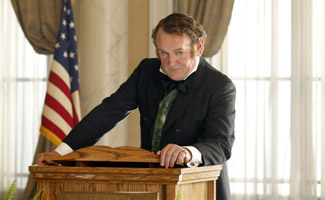 Colm Meaney, the actor who plays railroad baron Thomas Durant on Hell on Wheels, reveals the challenges of filming in a horse-drawn carriage and highlights similarities between race relations in the past and in the future.

Q: As a native Irishman, how do you relate to U.S. history?

A: I kind of have an interest in all history. And I suspect it comes from being Irish — we like stories, we like telling stories, which makes a lot of us lean towards being writers or actors or directors.

Q: How does Hell on Wheels fit into your historical interests?

A: It’s fascinating the way the writers have been able to bring in so many issues about the railroad that are still relevant today. How should you build a great project like this? Do you allow private capital to do it? Should the government be involved? My character Durant is prepared to go to any lengths to get the thing built and it’s an interesting debate whether that’s justified or not. It’s not like it’s just about the issues of 1860 — all those issues are still relevant today.

Q: What stands out to you about the time period of the show?

A: At the time, to go from New York to San Francisco would have taken six months — you had to do it by sea. With this railroad, you could do it in seven days… For us in this age of jet travel and all, it’s astonishing to kind of get your head around the fact that communication was very slow, travel was slow, and it was very different world.

Q: Your character, Thomas Durant, is based of a real-life historical character. Your sideburns — real too?

A: They are actually. They were stick-on for the pilot and then I’d grown them by the time we’d gotten to the series. Durant did have sideburns, but he also had a little Van Dyke-y beard which we decided not to go with.

Q: Tell me a little bit about Durant’s personal cab on the railroad. Was that an actual railway car?

A: They actually built real railroad cars — they’re mostly made of plywood… And they also built a stretch of railroad on the set location. We had two carriages built. One was the actual location and the other one was in the studio. So we could use either one to film scenes that took place in the carriage; the exterior one has actually been in motion. The art department has been incredible, I mean the attention to detail, they’ve evoked this period so brilliantly.

Q: What was it like riding in the horse-drawn carriage on the way out to the massacre site in Episode 2, “Immoral Mathematics.”

A: The idea was at one point to put the camera in the wagon with us for close-ups, but we shook around so much during that scene we could hardly speak. We were still being thrown all over the place even though the horses were just basically going at a very slow walk. So it gives you some idea of what people must have gone through, to drive west in a wagon.

Q: Do you agree with Durant’s vision of the world being divided between lions and zebras?

A: I think there’s quite few people who would subscribe to it, especially in a place like Wall Street. I mean I don’t personally subscribe to it — I would hope that the world is not like that — but you would have to look at the last four or five years to see that probably it is the case.

Q: You were an engineer on Star Trek: Deep Space 9. Tell me about going from the “final frontier” to the “first frontier”.

A: Because Star Trek was set in the future it gave great freedom to the writers to write about a wide range of issues and speculate. The relationship between different species became an issue as kind of a commentary on racism and, I think in a funny way, going back in time also gives you that freedom. We’re dealing with freed slaves, and Irish workers and Italians and various European nations and of course the native Americans — so you’re dealing with the question of race and race relations in both shows.

Click here to read an interview with Common, who plays freed slave Elam Ferguson on Hell on Wheels.