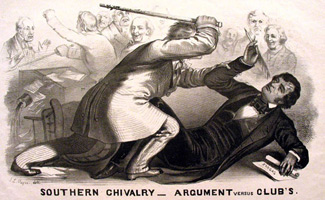 In the Hell on Wheels Handbook, AMCtv.com takes a closer look at Reverend Cole’s reference to Bleeding Kansas in Episode 4.

Bleeding Kansas was a series of battles between anti-slavery and pro-slavery forces, fought during the mid-1850s. The issue? Whether the territory of Kansas should become a free state or a slave state. The Kansas-Nebraska Act of 1854 dictated that the question be resolved by popular vote, prompting thousands of “Free Staters” and pro-slavery men — also known as Border Ruffians — to flock to Kansas to rally for their causes. The result was chaos and violence.

On May 21, 1856, a group of Border Ruffians invaded the town of Lawrence, where they destroyed two newspaper offices. “The presses were in each case broken to pieces, and the offending type carried away to the river,” said one eyewitness. They also burned down the residence of Gov. Charles Robinson and looted and vandalized shops. The fight didn’t end there either. Up on Capitol Hill in Washington D.C., South Carolina Congressman Preston Brooks attacked Massachusetts Senator Charles Sumner on the Senate floor, beating him with a cane over their divergent political views.

The rising tide against Free Staters angered abolitionist John Brown. “Something must be done to show these barbarians that we, too, have rights,” he said. On the night of May 24, Brown recruited a posse of men to murder five slavery advocates at Pottawatomie Creek. Brown ordered the victims out of their homes and executed them, splitting their heads open and hacking off arms. “All were found the next morning, by the road side, or in the highway,” said future president Andrew Johnson, “some with a gash in their heads and sides, and their throats cut; others with their skulls split open in two places, with holes in their breasts, and hands cut off.”

Pro-slavery forces retaliated by capturing and beating Brown’s sons (all of whom were involved in the Free State movement), killing one of them with a shot through the heart. Later that year, Brown and his men fought pro-slavery forces in the two-month Battle of Osawatomie. Brown eventually left Kansas, but fighting continued intermittently until around 1859. On Jan. 29, 1861, Kansas was finally admitted to the Union as a free state.

Many historians view Bleeding Kansas, a name coined by Horace Greeley of the New York Tribune, not only as a prelude to the Civil War, but as an important populist movement that began with civil unrest (much like today’s Tea Party and Occupy Wall Street movements) and ultimately instigated a major shift in American politics.