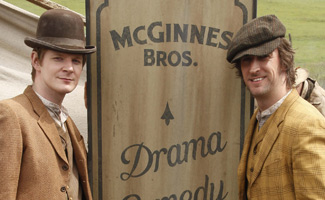 Actors Ben Esler (Sean McGinnes) and Phil Burke (Mickey McGinnes) talk with AMCtv.com about why they are perfect as the brothers they play on AMC’s Hell on Wheels.

Q: So far you two are always on camera together. You must have gotten to know each other pretty well!

Ben: Even after the pilot, we were always sort of talking back and forth and swapping calls, wishing each other happy Groundhog’s Day and stuff.

Phil: I’ve been a master fan of Ben Esler ever since The Pacific. It was one of my dreams to work with this gentleman — and let me tell you, it’s nothing but peaches and cream.

Q: Can you each reveal one thing about the other they wouldn’t want people to know?

Phil: Should we talk about the zombie thing, Ben, or do we not want anyone to know that?

Q: He’s lucky he’s not on The Walking Dead!

Phil: No, but this is the thing. He’s so entranced with zombies, it’s like he’s kind of driven towards them and averted at the same time. His heart almost wants to be with the zombies, but his head can’t really deal with it.

Q: And what about for Phil?

Ben: That’s a really hard question because I don’t think there’s anything about Phil that’s a real deep secret — he’s pretty candid. Phil can you help me out?

Phil: I missed his show once because I got the dates wrong on his concert! It’s true, I’m no good as a stalker.

Q: That’s probably a good thing! Tell me a little bit about the Magic Lantern tent you have set up.

Phil: What was really cool about the projector is that later on in the season we change up the light show. They gave us some different pictures and without getting in to it, these pictures were extremely racy — so racy that we couldn’t actually show them on screen.

Q: What was so racy about them?

Phil: I can’t really give away too much, but put it this way: it would had to have been an HBO show if they put those pictures on.

Q: In Episode 4, “Jamais Je Ne T’oublierai,” the two of you come up with a scheme to make a little extra cash. Tell me a little bit about how that scene was shot.

Phil: The [peep show] scene was shot with incredible anticipation! I was kind of interested to meet April [who plays Nell] — who Mickey’s got his eye on — and see what was going to happen inside the tent. There’s a lot of splashing in there.

Ben: We’re very impressed by our director of that scene, getting the coverage of the tub.

Phil: It seemed like everyone was having a great time in that tent!

Q: Phil, how does the Hell on Wheels story compare to ones you heard from your parents, who were actual Irish immigrants?

Phil: I was back in Ireland a few weeks ago, just trying to listen to the old guys about their great grandfather or whatever who made the trek to Oregon or wherever. It has been amazing to play this part — it really meant a lot.

Q: Ben, you’re Australian. What’s it like acting with an Irish accent?

Ben: Phil was kind of my coach! I worked on it really hard and I also had the benefit of having Colm [Meaney] and Dominique [McElligott, who are Irish] as well. Hopefully I sound OK!

Q: Why do you think you each got cast as the brother you did?

Ben: Phil and I are not identical characters — and I feel like the dynamic between the two of us is fairly similar on the show. Sean is a bit more reserved of the two, and Mickey’s more of a party animal. That’s true of both of us, right Phil?

Phil: [Laughs] I don’t know about this party animal bit! … It was funny because I felt the more Ben and I kept on hanging out together, we would get in these skirmishes, and maybe start ragging on each other a bit. I was like wow — I think they actually did a fantastic job of casting us. We are polar opposites, but exactly the same in more ways than one — which lends itself completely to the arc of the characters throughout the show. When things start hitting, you start seeing the differences within each character: as brothers they really are heads and tails.