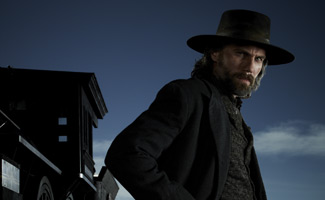 Mad Men. Breaking Bad. The Walking Dead. You’re already a fan of AMC’s other award-winning series so it’s time to make room for another great piece of television: Hell on Wheels. AMC’s latest series — which premieres on Sun., Nov 6 — concerns the building of the transcontinental railway. But don’t think this is going to be a conventional look at a piece of American history. In fact, the show’s creators compare the railroad to “the invention of the silicon chip,” and leading man Anson Mount, who plays ex-Confederate soldier Cullen Bohannon in the show, calls Hell on Wheels‘ central event an accomplishment that “every engineer in the world said was impossible.” Ready for more?

A Video Crash Course for Hell on Wheels