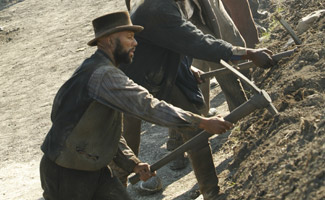 In this week’s Hell on Wheels news, Common praises the “socially profound” series, while USA Today says the show should quickly find its audience and bloggers talk up recently released Hell on Wheels video.

• The New York Times profiles Common, who calls Hell on Wheels, “One of the most important projects I’ve ever worked on in my life.”

• USA Today predicts good things for Hell on Wheels, “Considering the success AMC has had with Breaking Bad, The Walking Dead, and Mad Men.”

• After viewing the Hell on Wheels trailer, CriminalElement.com wonders, “Could this bring Westerns back to the mainstream?” while INeedMyFix.com proclaims, “Hell yes to Hell on Wheels!” and KitchenSofa.com says, “AMC is on a roll right now.”

• Television Business International talks with executive producer John Shiban about Hell on Wheels: “It’s not a history lesson, and it’s surprising how relatable it is. The railroad was the Internet of that period; it changed the world.”

• CinemaBlend.com links to the Hell on Wheels trailer and photos of the main characters.

• Variety reports that Sundance Global has acquired the rights to Hell on Wheels, which will play internationally.