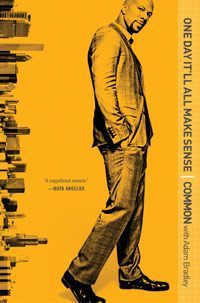 When Common entered the scene in 1992 with his album, Can I Borrow a Dollar?, the mostly underground artist found himself thrust into a hip hop environment where game-changing albums such as Dr. Dre’s The Chronic, Ice Cube’s The Predator, and Eric B. & Rakim’s Don’t Sweat The Technique were already blazing trails. It would have been easy for Common to disappear into the history books. After all, the competition was stiff. Yet, Common still stands today, not only as an accomplished, award-winning recording artist but also as a leading man who has co-starred alongside such luminaries as Denzel Washington (American Gangster), Queen Latifah (Just Wright), Ray Liotta (Smokin Aces), and Steve Carrell and Tina Fey (Date Night).

Despite his vast accomplishments, however, very little is actually known about Lonnie Rashid Lynn, the man a.k.a. Common. That’s all about to change with One Day It’ll All Make Sense. In this deeply personal, introspective memoir, Common unveils himself, layer by layer, from his childhood on the streets of the South Side of Chicago; to grappling with the decision to leave college, disappointing his mother, and pursuing a career in hip hop; to emerging as a talented recording artist faced with all the trappings of fame and success.

“People who know me as Common might find it hard to believe some of the things that made me Rashid,” says Common. “That’s partly why I’ve written this book, so that I can show myself as a man in full. That means telling some tough truths, revealing my faults and vulnerabilities. But it also means showing the true strength of my character.”

Compiled with open letters to loved ones, both living and those who’ve passed on, peppered with lyrics from some of Common’s songs throughout his career and his mother’s unflinching insight, the book challenges the reader to look beyond the celebrity and understand fully the man behind the spotlight. One Day It’ll All Make Sense is a no-holds-barred coming-of-age memoir, providing the reader with a window seat into the life and world of an artist who is not only unafraid to tell the truth, but faces his truth in all of its guts and glory.

One Day It’ll All Make Sense is now available in stores and online.