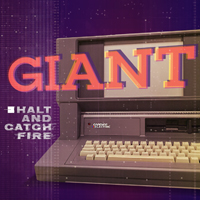 Things are heating up for Cardiff Electric’s rogue PC team. With the company’s senior VP John Bosworth under investigation for embezzlement, Joe MacMillan, Gordon Clark, and Cameron Howe are making a last-ditch effort to sell the “Giant,” their PC clone, at COMDEX in Las Vegas. An annual computer expo where all the major PC contenders show off their wares, COMDEX is the party the Cardiff team has been waiting for, and what’s a party without a killer mixtape?

To that end, Halt and Catch Fire music supervisor Thomas Golubić and his team at SuperMusicVision have crafted this new Spotify playlist from artists like Men at Work and A Flock of Seagulls. Rock out to the playlist now, then check back next week for the final Halt and Catch Fire playlist of the season.

Look after the jump to download songs from the “GIANT!” ’80s playlist now.

6. Re-Flex, “The Politics of Dancing”

9. Violent Femmes, “Blister In the Sun”

12. Adam Ant, “Desperate But Not Serious”