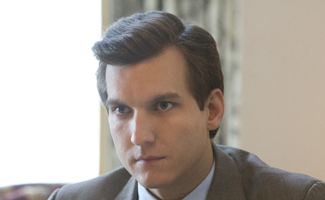 Scott Michael Foster, who plays Hunt on AMC’s Halt and Catch Fire, talks about growing up in the Silicon Prairie and his take on his character’s relationship with Donna.

Q: What drew you to the role of Hunt? Was there anything in particular that interested you about this character?

A: I grew up in Dallas and my Dad works for IBM, so I grew up in the environment of Silicon Prairie. I had stories from when I was a kid from my Dad about what the PC in the early age was like. I remember watching my dad work on PCs and I remember using Texas Instrument calculators in school. It was a bit nostalgic. Where Hunt goes in the show — it’s a very interesting story arc — and I think the audience will enjoy it. It was fun for me to play into because I was left in the dark, too, so I found out who Hunt was along the way.

Q: Hunt is a VP at Texas Instruments and uses a lot of technical jargon. Did you understand the terminology you were reading in the script?

A: A lot of that stuff was definitely technical mumbo jumbo that I had to look up. [Laughs] Once it was explained it me, it made a lot more sense.

Q: What do you make of Hunt’s relationship with Donna?

A: I think there was definitely attraction there. They went to high school together and he’s her boss now. Maybe Hunt wasn’t someone who she would ever date, but now that he’s in a position of power, he could manipulate, if he ever wanted to, even just to get a smile or a wink out of her.

Q: Do you think you’d have what it takes to do Hunt’s job?

A: Oh, God, no! Not at all. I don’t have the brain power. That’s definitely not me, but it’d be fun to know that kind of stuff.

Q: Do you remember the first computer you owned?

A: I remember having computers at my parents’ house growing up. We had different desktop PCs, but my first laptop was an IBM ThinkPad laptop. It was big, bulky, slow and terrible. Now I own a MacBook Pro. Very different.

Q: You were just growing up during the ‘80s. Did the show teach you anything new about this period of history?

A: I was a little, tiny kid in the ‘80s, but I do remember seeing the styles of clothes and I remember the cars from that era. It’s interesting to see that on TV now… that was my parents’ life. I will say, the thing I really enjoy about the show being in this time frame and exploring is the music. I think they did a really good job with the music, in the opening credits of the show and throughout each episode.

Q: What kind of challenges did this role present for you?

A: Well, even though I lived in Dallas for a lot of my childhood, I had to do an accent for this and I’ll be surprised to see how it turns out. I haven’t had a Texan accent in a long time.

Read an interview with Kerry Bishé, who plays Donna Clark on AMC’s Halt and Catch Fire.