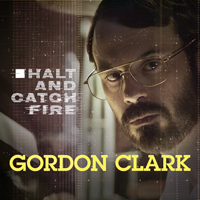 A once-promising engineer, Halt and Catch Fire‘s Gordon Clark (Scoot McNairy) is sleepwalking through life. He has a second chance at success now, but the deck is stacked against him. So what would a man longing for glory but straining under the pressure put on his personal mixtape? Tom Petty, Steely Dan, Eric Clapton, the Allman Brothers Band and other giants of ’70s and 80s rock, to name a few. Check out this exclusive Spotify playlist of ’80s music for Gordon Clark, courtesy of Halt and Catch Fire’s Music Supervisor Thomas Golubic and his team at SuperMusicVision. And be sure to check back each week for a new playlist based on a different Halt and Catch Fire character.

Look after the jump to download songs from Gordon Clark’s ’80s playlist now.

Don’t miss a new episode of Halt and Catch Fire Sunday at 10/9c on AMC.