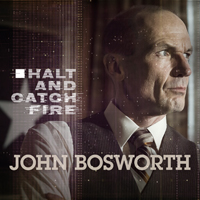 As Senior VP of Cardiff Electric, John Bosworth (Toby Huss) has helped to turn the company into a regional power playing by the book. So when an IBM hotshot hijacks his life’s work, it doesn’t sit well with the old-school Bosworth, who’s as Texas as they come. So it’s no surprise that his music taste runs to the country side of the radio dial, including music greats like Merle Haggard, Waylon Jennings, and George Jones. See what else Bosworth would listen to with this exclusive Spotify playlist of ’80s music for John Bosworth, courtesy of Halt and Catch Fire’s Music Supervisor Thomas Golubić and his team at SuperMusicVision. And be sure to check back each week for a new playlist based on a different Halt and Catch Fire character.

Look after the jump to download songs from John Bosworth’s ’80s playlist now.

1. Mickey Gilley, “Don’t the Girls All Get Prettier At Closing Time”

3. Waylon Jennings, “Lucille (You Won’t Do Your Daddy’s Will)”

7. Merle Haggard and Willie Nelson, “Why Do I Have to Choose”