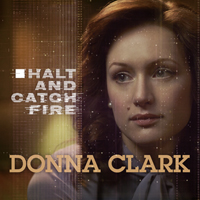 Halt and Catch Fire’s Donna Clark (Kerry Bishé) is a brilliant engineer in her own right, but must balance raising two children, her career and her increasingly erratic husband Gordon, who is wreaking havoc in her home. Fearing that the new Cardiff Electric PC project will result in the end of her marriage, it’s no wonder her personal mixtape leans towards the relaxing side, with artists like Billy Joel, Joni Mitchell and — owing to a background in classical music studies — a little Chopin and Mozart to boot. See what else Donna would listen to with this exclusive Spotify playlist of ’80s music for Donna Clark, courtesy of Halt and Catch Fire‘s Music Supervisor Thomas Golubić and his team at SuperMusicVision. And be sure to check back each week for a new playlist based on a different Halt and Catch Fire character.

Look after the jump to download songs from Donna Clark’s ’80s playlist now.

6. Joni Mitchell, “Underneath the Streetlight”

14. Wolfgang Amadeus Mozart, “Flute Quartet No. 4 in A Major”

18. Elvis Costello and The Attractions, “Every Day I Write the Book”

Don’t miss a new episode of Halt and Catch Fire Sunday at 10/9c on AMC.