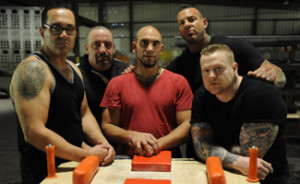 This week, Screen Crush has a clip and photos from Episode 5. Plus, Rob Bigwood, a Game of Arms competitor, is celebrated for being a vegan. Read on for more:

• Screen Crush, previewing Season 1, Episode 5, “Welcome to the Slaughterhouse,” observes that AMC has “gone arms-deep into the world of reality competition.”

• Ecorazzi features Rob Bigwood’s status as the only vegan competitor on Game of Arms, saying his diet is “no disadvantage.”

• According to Broadway World, the New York Arm Wrestling Association expects 2014 to be the “biggest competition year” in its history, citing increased interest since Game of Arms has aired.