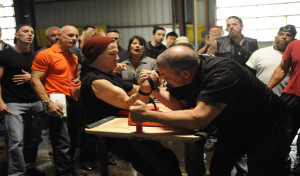 This week, a Game of Arms team beats up on Maxim. Plus, Zap2it shows off photos from this week’s episode. Read on for more:

• Maxim gets “severely beaten” in arm wrestling by the New York City Arms Control, one of the teams from Game of Arms.

• Zap2it shows off some photos from Season 1, Episode 4, “Bloodlines,” which features Rob Bigwood versus Chop Bertrand.

• One member of the Baton Rouge Roughnecks, interviewed by 225BatonRouge.com, gives credit to Game of Arms because “you have all these people who know nothing about arm wrestling that are interested in it now.”