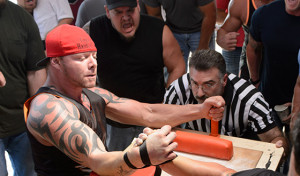 This week, Esquire reviews Game of Arms, while Paul Rudd and Adam Scott arm wrestle at an Oscar party. Plus, two Game of Arms teams get some publicity from their local media. Read on for more:

• Esquire talks up Game of Arms, commenting that “it’s easy to get sucked into watching a bunch of guys out-dude one another.”

• Arm wrestling finds its way to the Oscars as Paul Rudd and Adam Scott strike a pose at Vanity Fair‘s after-party, courtesy of a photo in TheWrap.

• The Erie (Pa.) Times-News interviews a member of an arm wrestling team that’s competing on Game of Arms. He reveals, “You win your battles in the gym, not the day of the contest.”

• A competitor at last weekend’s Maine State Arm Wrestling Championships tells The Maine Public Broadcasting Network that he was inspired to participate after watching Game of Arms.