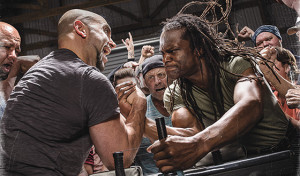 This week, Game of Arms has a new trailer and poster for those looking to whet their appetite ahead of the Feb. 25 premiere. Plus, several of the arm wrestlers on the show get their own promos. Read on for more:

• TVLine checks out a trailer for Game of Arms, an unscripted arm-wrestling drama that promises “more bulging veins than a new Hulk movie.”

• Head to Zap2it to view the new poster for Game of Arms, in which “two beefy men are sweaty and fired up as they compete in a high stakes arm wrestling competition.”

• Yahoo TV has a first look at an AMC promo for Game of Arms that features Michael Selearis, “who treats the streets of New York like his own personal gym.”

• At Sports Grid, Don Underwood is showcased in a Game of Arms preview, where he arm-wrestles a motorcycle.

• It’s Cobra’s turn in the spotlight in an exclusive promo at ShockYa.com.

• The Times-Picayune reports that arm wrestling club Baton Rouge Rough Necks will be on Game of Arms, which “appears to be no ordinary gun show.”

• The Erie (Pa.) Times-News profiles the members of the Erie arm wrestling team who will appear on Game of Arms.

• Another trailer comes courtesy of Hypable, where viewers can see the five wrestling clubs that will compete on Game of Arms.