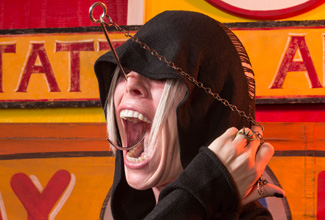 Q: The bed of razors stunt in episode 207 was very symbolic. Are all your stunts a form of self-expression?

A: In general, my stunts usually have some sort of symbolic or metaphorical meaning behind them, or else it’s for a cathartic experience to release certain emotions and feelings. The bed of razors was very much a metaphorical stunt that represented a transition in my life.

Q: Do you ever worry you’re pushing your body too far?

A: I do get concerned. It depends on the stunt. But I do realize that things might have long term effects or that something could go wrong at any time. It is a concern, but it comes with the territory.

Q: Have you had any close calls where you thought, “Okay, maybe I shouldn’t try that again”?

A: Yeah, I’ve had a lot of close calls. When I was first learning my regurgitation act, I had an object get stuck in my esophagus. They had to put me under and I was there [in the hospital] for about six hours. They finally got it out, but, yeah, that was a very close call. Of course with the bed of razors, I had a very close call with that gash. I’ve had a lot of things go wrong here and there. Usually when I’m practicing a very dangerous stunt, I will dial 911 on my phone but not hit send. So if something does go wrong, I can just hit the button. That’s some sort of fail-safe at least.

Q: This season you worked with Asia on a whip stunt. Have you ever teamed up with anyone else before?

A: I’m very much a solo performer. Asia is the first person I taught an act [to]. I do the acts for a reason and they are very personal to me. So I’m not going to do an act with someone else unless they get that. The reason I taught her is because I think she has a very interesting way of looking at the act… it’s not just some sort of party trick. I don’t, in general, like most of the performers out there because they do [their stunts] in sort of a “look what I can do,” show-off sort of way. But she does them for [personal] reasons and has an artistic method behind it.

Q: This season you tried to get your mother to come see you perform. Do you feel like the Freakshow has become your family?

A: If it is, then I’m certainly the black sheep of the family.

Q: What is one thing people would be surprised to learn about you?

A: I spend most of my off time studying philosophy and mathematics. Nietzsche is one of my top favorite philosophers. I really respect Descartes as well. Terence McKenna. All of the pre-Socratics, the early Greek thinkers.

Click here to read an interview with George Bell.