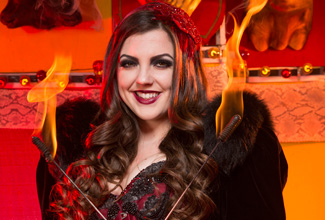 Asia Ray, resident Freakshow fire-eater and electric girl, discusses her relationship with Morgue and her transformation into an independent woman throughout this season.

A: I don’t know that I have specific stunts, but I kind of want to keep creating my own that mean something to me. I’m about to start working on a new stunt actually. I’m learning how to throw knives. But I’m kind of in the creative process right now. I’m taking it to another level — I want to make it different, but in my own way.

Q: Have you always loved performing? Were you in any pageants or sports as a child?

A: I wasn’t in any of those really. I was more on the artistic side. I was really into music. I played the flute. I was even in the concert band and marching band. I was really big on that. I also did some acting as well, but I think I like where I’m at performing now — doing my own thing — instead of acting or playing a piece of music that someone else created.

Q: A big part of this season is watching you transform into an independent young woman. What has been the hardest part of that transition?

A: It’s been a really strange year for me. I’ve gotten to the point where I’m an individual and very different from anyone else. I think I really took a huge leap and said “No, I want to start over.” I kind of started over to create the person I really want to be and the best version of myself. So I got rid of a lot of distractions and gave a lot of focus and meaning to what I do.

Q: Where do you get your fashion inspiration from?

A: I really had a vintage look [last season], but I think I mix the modern and the vintage look now. I really like the classy look of the older eras — the 20s were very wild but there was a sense of freedom, so I think I pulled that off with the vintage look. But in terms of what I wear, it’s another form of art for me in a way. I think this season I wore a lot of black and more simple looks. I felt like I had a lot to say so I wanted people to focus more on what I was saying than whether or not I looked pretty.

Q: Do you make any of your clothes?

A: It depends. I put everything together myself. I have some stuff made for me if I feel like I wouldn’t do a good job. I do make some stuff but mostly I just like to find a bunch of weird stuff and put it together to fit how I feel. I shop from one end to the other!

Q: What performer do you admire?

A: Well, I’ll tell you who really inspires me: Lana Del Rey, she’s a singer. I just saw her live and I was so inspired. She looks like a really pretty girl, but you can tell through her lyrics and the way she sings, she’s really deep and has something to say and is actually a very intelligent individual. I feel like in a way I can really understand that. I also love any performer that’s really crazy — any real performer that goes full out on-stage.

Q: As a young woman growing up in the Freakshow spotlight, do you find making new friends or dating a bit more challenging?

A: It’s hard to find a really good friend or a guy that’s worth staying on with. In general, it’s so hard to find real people who are dedicated and passionate about anything — I live in a really superficial area.  Morgue is my best friend on the show and the reason I like him so much is because he is such a real person and what he does is so impressive to me and I admire it. I want to be friends or close to people like that. They’re real, they don’t hold back about anything, they don’t care about stupid stuff and they’re more focused on doing important things and having meaning.

Click here to read an interview with Freakshow’s Todd Ray.